The second edition of the Thai Alphabet Cards is underway, and we've revamped the Tone Graphs, among other elements.

There is significant evidence for changes in the standard tones in Central Thai over time. While this is an important aspect of tone, and intermediate learners should become sensitive to this (as well as other important aspects of tone, which is quite complicated in running speech), still we have made the decision to use a common and conservative model for displaying tones on the Thai Alphabet cards.

For a model, we've revisited the original tone graphs of Arthur S. Abramson from his work The Vowels and Tones of Standard Thai: Acoustical Measurements and Experiments, International Journal of American Linguistics, Vol. 28, No. 2, April, 1962. This work is, after 44 years, still seen as the standard.

We've spent considerable time reviewing the literature since (and before) 1962, and especially the evidence presented for historical changes to the tones which have occurred since Abramson's published early work. While there are many publications, most have severe problems with them which prevent using any as a reference for the tone changes. In many cases, single case examples or synthetic averages are presented, but without the primary goal of a new standard, and therefore without the methodological rigor needed for adopting changes in the contours.

Again, there is evidence for changes to the tones of Central Thai over time, specifically by reviewing differences between a younger cohort and an older cohort, as presented in Inter- and intraspeaker variability inf undamental frequency of Thai tones, by Gandour, Potisuk, Ponglorpisit, and Dechongkit, Speech Communication 10 (1991), pp.355-372.

There is an intriguing article proposing a mechanism for tone change using Gedney's tonebox by Pittayawat Pittayaporn entitled Directionality of Tone Change, 2007. However, the so-called Thai tonal space in 4 stages suffers dramatically from a very poor choice of tonal examples in stages 3 and 4 (a single sample, and a synthetic result from a study contrasting tones in isolated exemplars vs. connected speech, respectively). While the data is insufficient in evidence, the underlying mechanisms still appear plausible, though would not operate in isolation from the population of speakers and vast variety and import of second languages on Central Thai (Siamese).

Abramson (1962) as the Signal Reference Work

Besides the fact that there is no real reference work that we might use with full plausibility, there are other reasons why the traditional tone graphs are best suited for the Thai Alphabet Cards:

Use of the Abramson (1962) Tone Contour Figures

To align the Tone Graphs in the Thai Alphabet Cards, we acquired an original copy of Abramson (1962) and scanned the two tone graphs (figures 3.5, 3.6 on pp. 126-127). We then scanned the figures into PDF format and and imported them into the Inkscape vector graphics program. We then traced the contours and separated them into individual graphs. 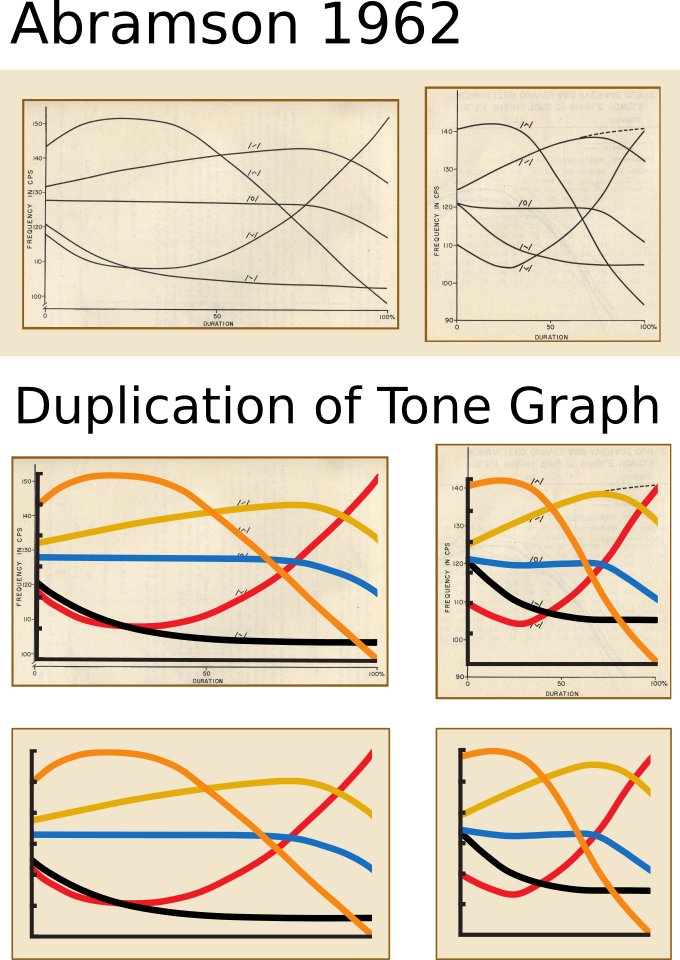 The main changes are a return to the original tone countours, as well as aspect ratio and shape. This also reduces the space used by the graphs without reducing information. 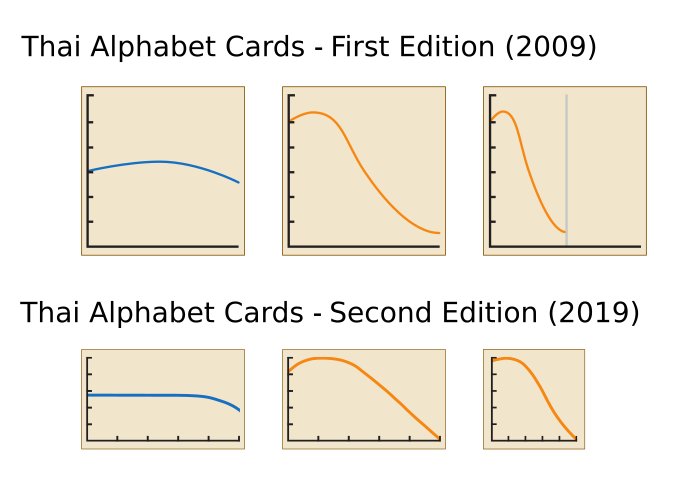 Note that there is a bit less distortion in the short vowel tone (which was only a compressed long vowel tone, which was based on Naksakul (1977) Thai Phonology as adapted in the Elementary Thai for Foreigners text as published and taught by the Linguistics program at Mahidol University (1991). 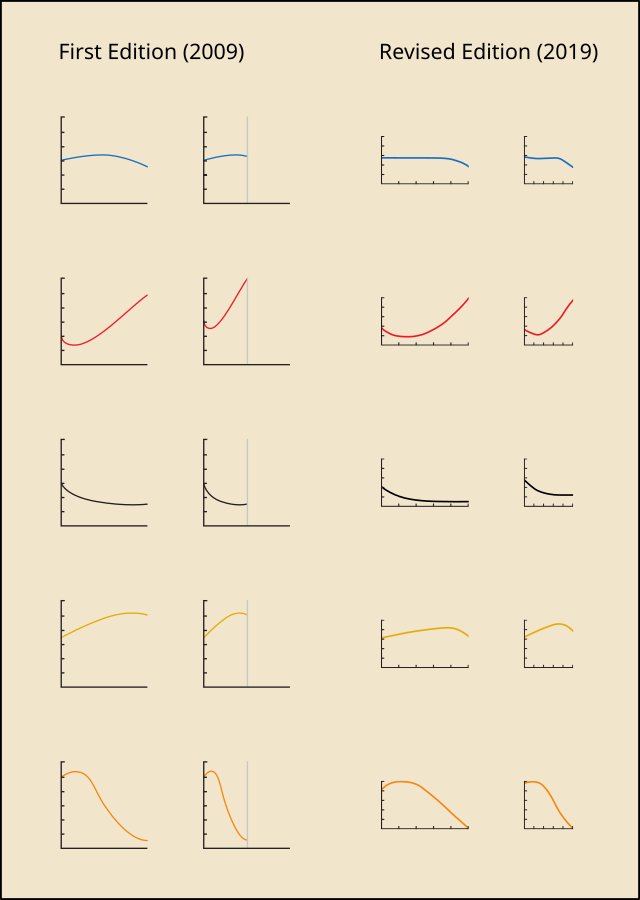